I’m happy to say that for the most part my husband and I get along amazingly well. Although we get on each others nerves every so often we rarely fight. When we do argue it’s usually about extended family issues that we really don’t have much control over anyway.

The one exception to this rule is furniture shopping. If you drop my husband and I inside a furniture store we will inevitably start fighting about what to buy, how much it costs and the difference in our tastes.

It all started innocently enough. Years ago, after we purchased our primary residence, my husband and I caught wind of a sale for a well known furniture store in our area. We were a few months away from getting married and were living with mismatched hand-me-downs from our parents.

I wanted new bedroom furniture and he wanted new items for the dining room. We couldn’t agree on the color, the style, the type or the cost. It happened quite a few years ago, but I think he got angry, I started crying and somehow or another we bought both.

Years later the same arguments would occur in IKEA as well as furniture stores up and down the North Carolina coast. I don’t know what it is about those stores, but if you put my husband and I in one at the exact same time it’s likely to induce a fight.

The worst experience occurred late one night while I was out shopping for coffee tables at a ‘going out of business’ sale. I found a coffee table similar to this one 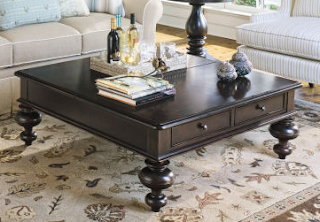 that I just had to have. I thought the color was perfect and the shape quite beautiful. I called my husband and asked him to swing by the store to see it. He wasn’t happy with a) being called to come to a store and b) driving out of his way just to see a table. As soon as he arrived he let me know the table would not work, but I was insistent that we purchase it.

The price was great and after a bit of time he reluctantly agreed to the purchase. We brought that coffee table into the house, laid it in front of the couch and I immediately realized it was way too large for the space. Well I guess my husband knew that well in advance, but of course I was certain it would be the perfect fit.

For weeks and months we had to work around that table. We squeezed between it and the sofa or walked the long way around the other side of it. Eventually I gave in, gave up and moved the table to a different room. I placed it in a very tiny room, that we rarely use, but that to be honest, it’s in a place where it doesn’t really fit. My husband wanted to get rid of it all together, but for some reason I could not part with it. I think I didn’t want to admit that he was right.

Eventually I’d like to move that table into the basement. I say eventually, because we need to remodel the basement before we could move it. In the mean time I have my eye on a new set of coffee tables, but considering this is one of only a handful of fights my husband and I have had in the history of our relationship, I must admit that I’m nervous to pull the trigger on them.