Have you ever seen a sheep standing tiptoe on the ears
of a very tall giraffe while a crowd looks on and cheers?
And have you seen an owl helping them to tug
a rainbow from the sky, like a multi-colored rug?

This is the story of Mala the rhino who can’t help feeling blue after her friend moves away. Her friends, an owl, a sheep and a not-so-humble giraffe get together with sun and create a crazumptious plan to show Mala that blue is as beautiful as all the other colors. This colorful story of friendship, love and loss will delight children while encouraging them to embrace their emotions in a healthy way.

Okay. I know it may sound a little cliché to say, but I absolutely love this book! Discussing emotions with adults is difficult; discussing emotions with children can feel almost impossible. Last year my son’s teacher created a feelings chart using the colors red, green, yellow and blue. While some of the children couldn’t read they knew that green was a feeling of peace while red represented feelings of anger. My son could read all of the words on the chart and he found himself walking over to the feelings chart multiple times a day to express his emotions.

I love how the author uses the color blue to denote the rhinos feelings of loss. The rhino is sad, but doesn’t want to be overwhelmed with despair. Children are very aware of their feelings but cannot always talk about them. This story does a great job of representing loss through color. The other characters recognize their friend’s sadness and ultimately help her to realize that blue is an important and beautiful color.

At the end of the day we do not want our children to deny their feelings, but rather to accept and embrace them. The little rhino’s friends help her to see the value in blue and all of the other colors of the rainbow.

What an incredible empowering story for children. It talks of friendship, loss and ultimately the recognition of a child’s feelings and the importance in embracing those feelings rather than casting them away. 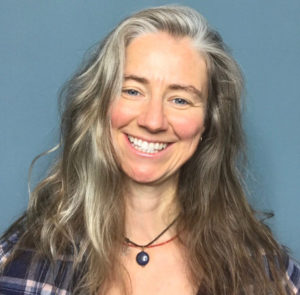 Amanda Jayne is a teacher, heart circle coach and a holistic health practitioner who is finally getting around to writing those books she has always wanted to write. As a child, Amanda found safety, comfort and a gateway to imagination in the books she read, and the desire to create this for others is what led her to begin writing books for children.

In an effort to help young readers see the magical pictures and colors she imagines, she decided to have a go at illustrating them herself.

In the past, Amanda Jayne worked in the mental health field and in 2009, after gaining her masters in Spiritual Psychology, she became passionate about the importance of emotional and self-cultivation in the midst of a world filled with overwhelming mental stimulation. Amanda has a love of travel, exploring other cultures, trees, art and eating dark chocolate.

‘A Rainbow In Her Pocket’ is Amanda Jayne’s first children’s book.  She is also the author of a travel adventure book, ‘Close Encounters Of the Traveling Kind’. .After living in Bolivia, Japan and the USA, she now lives in a quiet corner of Kent in the UK.

« Previous Post: Avoiding Misery By Balancing the Desire to Spend and Save
Next Post: To Retire Early You Must Work Hard Now »