Last year my husband and I planted our first garden. We put together a simple four-by-four foot garden box, (without a bottom), hooked up a small irrigation system and planted four different types of seeds. The crop consisted of beets, cantaloupe, carrots and jalapeno peppers. All together we spent less than $25. Of course, 90% of the money was spent on the box and irrigation, with just a couple of dollars spent on seeds.

While the garden grew quite quickly, (we placed it in a super sunny spot in our front lawn), the harvest wasn’t quite as spectacular as I’d hoped.

The cantaloupe grew large enough to harvest, but they weren’t particularly sweet. I later learned that cantaloupe take on the flavor of the soil in which they are grown. I guess our soil wasn’t quite right because they tasted quite bland. I popped them all in the blender and added them in place of juice to my daily smoothies.

The beets grew quickly, but I planted them too close together and I don’t think they had enough room to fully expand. I think they would have been edible, but they were so tiny that I decided not to bother trying to prepare them.

The carrots were the worst of all. After digging a couple of carrots up too early I waited a really long time before harvesting the rest. Unfortunately none of them ever grew hardy and strong enough to eat, so they all went directly into the compost pile.

The biggest success was the row of jalapenos that grew in the middle of our box. I grew so many peppers that I couldn’t possibly eat all of them. They grew longer and hardier than anything else I planted.

This year I’m taking a new approach to the square foot garden. My husband built two additional boxes for me and I plan to grow a larger variety of fruits and vegetables. The focus is on strawberries, cucumbers, zucchini, red peppers, broccoli, chives, peas, shallots, pablano peppers and flowers.

I splurged on two organic 36 pellet seed starter kits that look a lot like the picture below. I purchased both kits for around $4 each, (after a 20% off deal), from Ace Hardware. I planted the first set of seeds in sunny, cat-proof area of my house last weekend. I hope that I’ll grow a hardier garden by starting the seeds indoors. 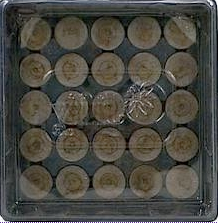 I also plan to follow the spacing and planting rules for a square foot garden much more closely this time around. Last year I think I crammed too many seeds together. In the end the plants were all vying for the same piece of property, which hampered their overall growth and made most of them inedible.

Last year we were fortunate enough to have an organic, bug-free, rodent free garden. We grew an awful lot of jalapeno peppers, which had sharp, sticky stems. I’m not sure if this plant kept the pests out of the rest of the garden but I intend to plant a few jalapeno and habanero peppers again this season just in case it did.