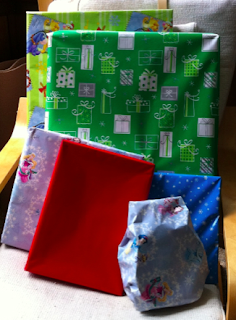 As the nesting instincts settle in I took an hour or so to straighten out the contents of plastic bins that recently made their way onto shelves in our basement. Among the neatly sorted items I found a number of gifts I purchased for family members last year.

I’m not typically a fan of buying gifts well in advance because it means the recipient is more likely to get stuck with something they might not want. After all they won’t be able to return or exchange a gift that was purchased six months prior to the time they received it. However, every once in awhile I break this rule and buy items for family members that I’m pretty certain they’ll love.

As I was digging through the bin I found six gifts that will make their way under the Christmas tree this year. Rather than placing them aside and dealing with them when the holidays roll around I decided to pull out the wrapping paper. So strangely enough I now have six wrapped Christmas presents waiting to be opened. This definitely seems a little crazy, but I’m blaming the nuttiness on pregnancy hormones.

Despite the fact that it’s only August wrapping those gifts immediately put me in the Christmas spirit. I found a few great coupons for $10 off a $10 purchase at various stores and used them to purchase stocking stuffers for my sister-in-laws.

Since the baby is set to arrive around the end of October I have a feeling a lot of my Christmas shopping will be performed online this year. I don’t see myself dealing with the hassles of long lines and crazed shoppers in November and December. I’d like to create wish lists for my family members and place price watches on items I think they might love. It’s just one more plan to set in place before the little one arrives.