Today is an absolutely beautiful day. I live just outside the Washington, DC border and the temperature outside my house is a perfect 74 degrees. There’s even a slight breeze blowing through my windows, but to be honest it’s too nice to be cooped up indoors, so I keep finding excuses to wander outside. I took out the trash, bundled up some recyclables, planted some seeds and took photos of my box garden.

I’m super excited about the garden this year. I started a bunch of seeds inside and spaced them out nicely once they got large enough to move into the garden. Last year I planted seeds too close together, and most of the vegetables ran out of space to grow. I’ve already made a few mistakes, like planting some seedlings while it was still too cold. My poor cucumbers didn’t survive when I transported out of my very warm house. That was a real bummer.

I can’t wait for the zucchini, which just started to flower this week. I bookmarked a bunch of new recipes in anticipation of their arrival. 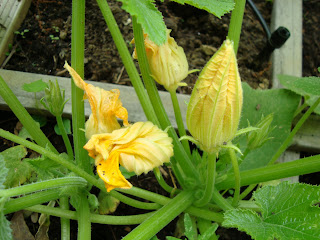 I’ve been growing garlic since the fall. It’s on the left in the picture below next to my zucchini. I have no idea how long it takes garlic to grow, but this stuff has been in the ground forever! 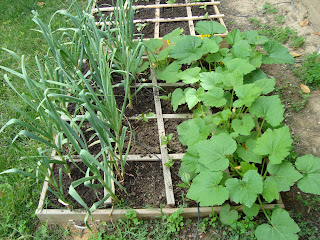 I’m also experimenting with a hodge–podge of other flowers and vegetables. Among the list are broccoli, shallots, strawberries, peas, peppers, cucumbers, forget-me-nots, zinnias and daisies. I also noticed a few flowers on the blueberry bush I bought last year and the leaves on the raspberry twig, (it’s too tiny to call a bush), grew back, so I hope it might actually bud a fruit or two next year. 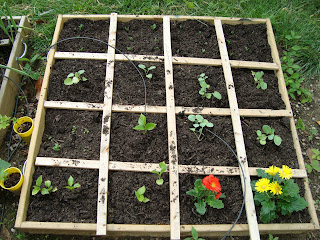 3 thoughts on “A Perfect Day to Play In the Garden”