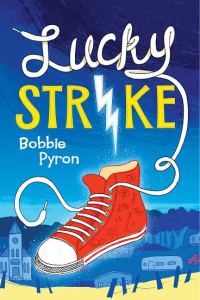 By the award winning author of ‘The Dogs of Winter’, Bobbie Pyron.

A rich, southern voice tells the unforgettable story of two vulnerable outsiders, the lightning strike that turns their world upside down and the true meaning of lucky.

Nate Harlow has never had a lucky day in his life. He’s never won a prize, he’s never been picked first, he’s never even won a coin toss. His best friend, Genesis Beam (aka Gen), believes in science and logic, and she doesn’t think for one second that there’s such a thing as luck, good or bad. But only an extremely unlucky person could be struck by lightning on his birthday… and that person is Nate Harlow. By some miracle, though, Nate survives, and the strike seems to have changed his luck.

Suddenly, Nate’s grandpa is the busiest fisherman in their small, beachside town. And Nate finds himself the center of attention, the most popular kid at school, the one who hits a game-winning home run! This lucky streak can’t last forever, though, and as a hurricane draws close to the shores of Paradise Beach, Nate and Gen may need more than just good luck to save their friendship and their town: They need a miracle.

I think of myself as a lucky person. In fact I talk about quite often and I’ve written about it a few times too. I am fortunate in more ways than I can count, but I feel straight up lucky too. I’ve won my fair share of raffles and contests. A couple of times I’ve felt a certain tingly sensation in my body prior to winning. During one particular raffle I read the numbers on my ticket aloud and just knew I’d win.

My brother feels the complete opposite way. He often says I received the ‘good luck’ from my dad, while he received the ‘bad luck’ of my mother, but I wonder how much is really luck and how much is perspective. My brother tends to approach situations negatively, whereas I typically think positive thoughts my just turn my luck around.

I love how the author discusses luck throughout the book and how the character Genesis Beam attempts to understand it.

After Nate tells Gen how his luck has changed she discusses the concept with her mother. She says, “I keep telling him there’s no such thing as luck, good or bad. Although it is an interesting theory, and it does seem things have been going his way. But that could just be self-fulfilling prophecy, couldn’t it, Mama? I mean because he thinks he’s lucky, he has succeeded more, right?”

Her mom responds, “Well that could be, honey. Maybe he’s gotten more self-confidence because he believes his luck has changed, and you and I both know Nate’s never had an abundance of self-confidence. But on the other hand, how do you prove the difference between the the power of belief and the magic of luck?” I love that question. I have often wondered if I am lucky or if I just feel that way.

I connected deeply to this book and thoroughly enjoyed reading it. If you’ve ever thought about luck and what makes a person lucky I highly recommended it.

Oh I'm SO glad you connected with my book! Many thanks!

Thanks for taking part in the tour. I'm so glad you enjoyed 'Lucky Strike'!

Hi, I’m Jewels, otherwise known as One Frugal Girl. I am a forty-year-old wife, mother, blogger, personal finance enthusiast, optimist, former software developer, and achiever of financial independence. This blog is my story. Welcome to my little corner of the internet.