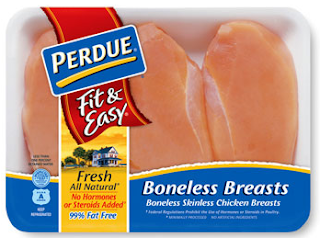 As I gathered up a bunch of old newspapers and magazines for the recycle bin I noticed a 50% off sale on Perdue chicken in this week’s Giant circular. I needed to pick up a few staples like bread and milk anyway, so I decided to head over to the grocery store after work. I actually thought the store might be out of chicken. After all 50% off is a really good deal for Perdue. Even with a good sale the price is typically only reduced by a dollar or two. My store just happened to be loaded with chicken. In fact, a butcher was loading the shelves with pounds and pounds of the stuff.

My husband and I eat chicken a lot. Actually, ‘a lot’ is quite the understatement. We rarely eat beef, seafood or pork, so chicken seems to make it’s way into our meals at least three or four nights a week. I couldn’t resist the wall of chicken in front of me. I pulled 15 packages of chicken off of the shelves and into my cart.

When I got to the checkout counter the cashier chuckled, because I had one gallon of milk, one package of white bread and 15 packages of chicken. I told the cashier I actually considered filling the entire cart, but I wasn’t certain how long I could store poultry in the freezer. When I got home, Google told me I could store it for up to 9 months.

I know that I can buy cheaper cuts of poultry or purchase whole fryers or thighs, but I like the taste and convenience of chicken breasts and it’s one place I just won’t skimp. I’ll buy store brands if they are on sale, but even at sale prices I rarely find chicken for $2.50 a pound, which is the price it was tonight.

So here’s the question of the day. Should I return to the store to pick up more chicken while it’s on sale or should I look at the stocked freezer and say enough is enough? I could easily stock up on another 15 packages and have enough chicken to last a couple of months, but I must admit that it feels a bit insane to stock this much. On one hand I don’t want to seem crazy, on the other hand, I don’t want to turn a blind eye to saving nearly 50 bucks!

14 thoughts on “How Much Chicken Would a Sane Girl Buy?”