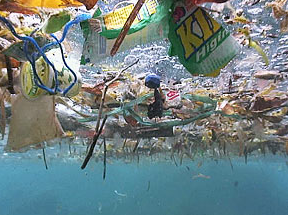 Late last night I finally got around to watching Oprah’s Earth Day episode. The show began with a conversation between Oprah and Fabien Cousteau, the grandson of Jacques Cousteau. Fabien Cousteau talked in great detail about the Great Pacific Garbage Patch, a heap of garbage swirling in the Pacific Ocean between the coast of California and the coast of Japan. A heap of garbage that is estimated to be twice the size of Texas.

According to the show, “in some places, the floating debris—estimated to be about 90 percent plastic—goes 90 feet deep. Elsewhere, there are six times more pieces of plastic than plankton, the main food source for many sea animals. Marine biologists estimate that about 80 percent of the litter is from land, either dumped directly into waterways or blown into rivers and streams from states as far away as Iowa.”

The show depicted deep sea turtles mistaking plastic bags for food and birds wrapped in plastic debris. I must admit that I had never heard of the Great Pacific Garbage Patch before, but I was appalled by the site of mounds of garbage floating in the deep blue sea.

In general my husband and I actually generate very little true garbage. We do fill up the recycle bin at least half way each week, but on average we throw out only one large bag full of trash. We primarily eat food found around the perimeter of the grocery store, items like fruits, vegetables, cheese, milk, yogurt and meats that don’t contain a lot of packaging. We don’t eat frozen dinners and we almost never bring home takeout, so in general we keep the garbage in our house to a minimum. We do have staples on hand like pasta and canned tomatoes, but we don’t purchase a lot of individual packaged items or snack items like cookies and crackers.

I keep reusable grocery bags in my car and use them whenever we go to the grocery store. In fact, the few times that I have forgotten to bring them inside, I’ve actually left my cart full of groceries and gone back out to the car to retrieve them.

Here are a few facts about plastic bags from a website called 1 Bag at a Time:

This Mother’s Day I have decided to purchase reusable shopping bags for my all of my family members. It’s not exactly a glamorous gift, but it’s the least I can do to help my family and the earth. My husband has become a complete convert. Not necessarily, because he wants to save the earth, but more so because the reusable bags can hold so much more and are so much easier to carry.

According to 1 Bag at a Time: The use of reusable shopping bags twice a week for two years would save the need for 832 plastic bags. It would conserve enough petroleum to drive 60 miles and save 11 pounds of garbage from reaching the landfill.

This year I’m going green for Mother’s Day… Here’s to hoping my mother and mother-in-law like their gifts!

I love the Envirosax reusable grocery bags. They are well designed (I like how they fold into the size of a sushi with a snapped on button like what umbrellas have to secure them), crazy light, really strong and can fit two whole plastic shopping bags. Plus they have really cool designs! I got two myself and plan to give them as gifts to some family members this year:)http://www.envirosax.com/products/graphic_series/

Oh monograms! I love that idea!

Thanks for the mother's day inspiration. I'm in love with my market tote so I got a monogrammed one for my mom! Hopefully it will inspire her to use less plastic.

That is terrible. I never realised that there was so much garbage in the ocean...humans are very destructive to the earth!

OMG, i'd never heard of the garbage patch before either. THAT IS DISGUSTING. it's because people litter and then stuff gets swept into the storm drains and outletted to the ocean, i'd bet!! how AWFUL!!

can we just put a big net around it and start hauling it back to land? the thought of all that trash in the ocean is horrifying me.

Hi, I’m Jewels, otherwise known as One Frugal Girl. I am a forty-year-old wife, mother, blogger, personal finance enthusiast, optimist, former software developer, and achiever of financial independence. This blog is my story. Welcome to my little corner of the internet.